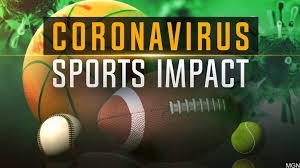 Covid-19 and the Impact on Our Sports World

But the world of sports shut down in mid-March because of the coronavirus. The NBA, NHL, MLB, PGA, MLS, USATF, ATP, USAT, NASCAR, XFL, NCAA, your local high school and your town’s recreational sports leagues all closed. Two very long months later, sports are only beginning to reopen. And the impact to our collective psyche and to the business of sports will be felt for years.

While the impact of sports’ closings is severe, the world of sports has stopped before and it has always returned. Many of us remember that immediately after the terrorist attacks of September 11th, Major League Baseball, the National Football League and the NCAA all took time off as we tried to digest what happened and console one another. And within communities across our nation, local sports hit the pause button too as our country grieved. But in the days and weeks immediately after the 9/11 attacks, sports started bringing us together and helped us heal.

This Time, It’s No Different

It is true that COVID-19 has affected global sports like nothing we’ve ever seen before as it has devastated businesses across the globe, including the airline, retail, restaurant, hotel, movie theaters, automobiles and oil and gas industries, among countless others.
Let’s examine the current state of the sports industry so we can better understand where things stand, where they might be going and how we might be able to help.

The Value of Professional Sports

The global value of the sports industry is estimated to be about $470 billion – an increase of 45% since 2011 – and with every passing year, that number seems to increase.
In many ways, sports leagues are entertainment companies, especially when you consider how sports teams make money. While it is inherently more complicated, sports teams essentially make money three ways:
• Broadcasting Revenue (think TV contracts)
• Advertising Revenue (sponsorships)
• Game Day Revenue (ticketing)
While each sports league has its own formula, basically the idea is that the overarching league inks broadcasting deals and then distributes the revenues to each of the underlying sports teams. And broadcasting revenue is huge, as the value of sports media globally is approximately $50 billion.
Consider that:
• In 2014, the NBA inked a TV deal worth $24 billion over 9 years;
• In 2018, Major League Baseball inked a deal worth $5 billion over 7 years
• In 2019, the English Premier League inked a broadcasting deal worth $12 billion over 3 years

We Love to Watch Sports

No matter what your favorite sport, you probably watch it on TV, right? Because almost everyone watches sports at least once during the year. But does it come as a surprise that the most-watched televised sporting events actually take place outside the United States?

In fact, of the Top 10 most watched sporting events around the globe, three are soccer, two are cycling, two are Olympic Games (winter and summer), and Rugby, Cricket and the Asian Games round out the list. None are in the U.S.

Holding the top spot for the most watched sporting event by cumulative audience is the FIFA World Cup, which draws an average cumulative TV audience of 3.5 billion every four years – that’s more than half of the world’s population aged four and over.

Second on the list is the three-week Tour de France, which attracts an average viewership of 2.7 billion. Compare these numbers to the most watched sporting event in the U.S., which happened to be the 2015 Super Bowl that drew 114 million (last year’s drew just under 100 million).

The Most Valuable U.S. Sports Teams

Effects of COVID-19 on Professional Sports

The effects of COVID-19 will continue to wreak havoc on the business of professional sports for the foreseeable future. Everyone involved in the business of sports, including owners, coaches, players, the media, advertisers, suppliers, fans and those that make the games function are trying to wrap their brains around the impact of cancellations and what can be salvaged.
This is especially vexing as it is very likely that longerterm, the future might not look anything like the past. Think about all the changes to our lives postSeptember 11th. The entire professional sports ecosystem will be impacted, and the impact will be significant as smart people try to answer questionslike:

• How can sports teams mobilize their workforce to return?
• Will advertisers cancel partnerships?
• Can games be played without fans? Are players’ contracts as valuable without fans?
• What happens if a second wave of COVID-19 breaks out?
The answers to these questions and more will be decided over the next few months and there will surely be disagreements among well-intentioned experts and “Monday-morning-arm-chair-quarterbacks.”

Can You Invest in Professional Teams?

At different times over the last few decades, there have been a few professional sports teams that have been publicly traded, allowing small investors the chance to own part of their favorite teams – or at least part of a professional sports team. But the list is very small and the historical results are mixed.
The Atlanta Braves baseball team is owned by publicly traded company Liberty Media, which trades under the symbol “BATRA.” The NBA’s New York Knicks and the NHL’s New York Rangers are owned by publicly traded company Madison Square Garden (symbol: MSG)
The NBA’s Boston Celtics, MLB’s Cleveland Indians, and the NHL’s Florida Panthers were all publicly traded stocks at one time too.
The NFL’s Green Bay Packers have been publicly traded since 1923 but are only available at certain offering periods.
While there might be indirect ways to invest in your favorite professional sports team – like buying tickets and apparel – there are ways you can invest in an almost $20-billion sports industry very directly. And such an investment allows you to be owner, general manager, coach and trainer all at the same time: Youth Sports.

There is no doubt that sports will play a huge role in our shared recovery. And while professional sports are important, Youth Sports will probably play a larger role in bringing local communities back together. Especially when you consider the sheer size of Youth Sports today.
Did you know that in America:
• Youth Sports brings together more than 60 million participants annually?
• Estimates predict that there will be more than 80 million participants in Youth Sports in just ten years’ time? or
• 65% of kids under the age of 17 participate in at least one organized Youth Sport?
Further, Youth Sports is huge business, as it represents a $19.2 billion market in the U.S., dwarfing the $15 billion size of the National Football League.
We intuitively know the value of Youth Sports, including the obvious physical benefits as well as the social and emotional benefits for kids. But surprisingly, the attrition from organized youth sport is very high. In fact, one-third of participants drop out annually and as many as 70% drop out by their teenage years. Why do kids drop out of youth sports?
Well, studies have identified “fun” as the primary reason for participation in Youth Sports to begin with and when kids stop having fun, they quit. Yes, it’s true that defining “fun” is challenging, and well-intentioned adults might define “fun” differently.
But to paraphrase from Supreme Court Justice Potter Stewart from the 1960s, we can honestly say that “fun is hard to define – but we know it when we see it.”

A sense of community is important to almost all of us in one way or another. We join sports clubs and sports teams that represent what we care about and what interests us the most. And while the push by small local businesses to “buy local” is heightened because of COVID-19, the truth is that the concept is as old as our country. And the reasons for buying local have not changed one bit too.
Supporting local businesses helps your neighbor, boosts local economies by keeping money in the community, and benefits us all. In fact, community coop Ozark Natural Foods states that “every dollar spent generates twice as much income for the local economy.”
When it comes to supporting local sports, the concept is the same. Did you know that our communities have:
• Over 180,000 Little League baseball teams?
• Over 3 million youth soccer players?
• Over 16,000 high school football teams? or
• Over 1 million boys and girls playing high school basketball?

Again, there is no doubt that sports will play a huge role in bringing our communities together as we recover from the emotional and financial impact of COVID-19. And we all play a role.

If you’re wondering what role you might play, consider supporting your local Youth Sports teams by:
• Becoming a coach
• Becoming a referee
• Bringing post-game treats for all the kids
• Sponsoring a team
• Volunteering as a team manager
• Going to watch a local kids’ game and cheering
• Encouraging all kids to play sports
• Donating old sports equipment
• Thanking a coach
The Boston Globe ran an article on April 3rd with the headline: “Sports, like the rest of life, will never be the same again.” Although the article was written with an intentionally pessimistic slant, let’s hope that both sports and life are never the same gain – instead, both become better.
There’s an old saying that it takes a village to raise a child. Well, it takes sports to raise a village.

Be Part of Your Sports Village.